This one has been annoying me for a while – I had an Office 365 Group that I created many years ago in Office 365 that I cannot convert to a Microsoft Team.

This is what I see in Teams to do this process. First, click “Create a team” 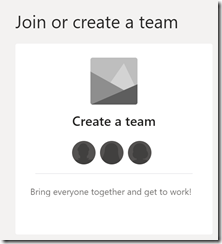 Followed by “Create a team from an existing Office 365 group” which is found at the bottom of the creation dialog in the Teams app:

I get a list of Office 365 Groups but not the one I want. In my example I see six groups: 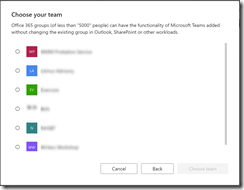 The rules for converting an Office 365 Group to a Team is the following:

Both of these are true for the group I want to convert, but the group still does not appear in the Teams conversion page shown above:

So I resort to PowerShell:

Get-UnifiedGroup returns all my groups and shows that the group exists (I know it does – its got content in it!)

Specifically I am after the ExternalDirectoryObjectID value

I get back a lot of red text. In this is reads “Message: Team owner not found”. This is odd, as the Team does have an owner – I can see this in OWA for the Office 365 Group

And I can see this using Get-UnifiedGroupLinks as well:

This returns nothing, so I presume nothing has changed.

I take a look in New Team > Convert Group option – and as if by magic, I can see the Office 365 Group I want to make into a Team 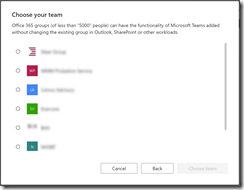 Its the one at the top in all these redacted images – the logo matches the group above, and I now have seven Office 365 Groups that are candidates for Teams.