The above is what happens in most cases – the user on-premises has a ExchangeGUID value, that is synced to the cloud, and then the user is licenced and a second mailbox is not created. But there is an edge case where an on-premises user with a mailbox (and therefore has the ExchangeGUID attribute populated) will also get a mailbox in Exchange Online. This happens where the organization manually created cloud mailboxes before enabling AADConnect to sync the directories, and these cloud users match the on-premises user by UserPrincipalName or primary SMTP address.

In this above case, because they are cloud users with an Exchange Online licence they get a mailbox. Deleting the cloud user and then enabling sync will cause the original cloud mailbox to be restored to the user account as the UserPrincipalName matches.

For example, the below shows a user being created in the cloud called “twomailboxes@domain.com”:

The user is granted a full Office 365 E3 licence, so this means the user has an Exchange Online mailbox. There is no AADConnect sync in place, but the UPN matches a user on-premises who has a mailbox.

In Exchange Online PowerShell, once the mailbox is provisioned we can see the following:

Repeating the same on-premises will show a separate user (remember, no AD sync in place at this time) with the same UPN and of course a different ExchangeGUID.

Note that the on-premises object ExchangeGUID is not the same as the cloud ExchangeGUID. This is because there are two seperate mailboxes.

Get-User in the cloud will also report something useful. It will show the “PreviousRecipientTypeDetails” value, which is not modifiable by the administrator, which in this case shows there was not a previous mailbox for the user but this can show that a previous mailbox did exist. For completion we also show the licence state:

Now in preparation for the sync of the Active Directory to Azure Active Directory, the user accounts in the cloud are either left in place (and so sync will do a soft-match for those users) or they are deleted and the on-premises user account syncs to the cloud. In the first case, the clash on the sync will result in the cloud mailbox being merged into the settings from the on-premises mailbox (on-premises values overwrite cloud values unless on-premises value is null or does not exist). In the second case, cloud object deleted before sync, there is no user account to merge into, but there is a mailbox to restore against this user. And even though the newly synced user has an ExchangeGUID attribute on-premises that is synced to the cloud, and they have a valid licence, Exchange Online reattaches the old mailbox associated with a different GUID but same UPN/email address.

The impact of this is minor to massive. In the scenario where MX points to on-premises and you have not yet moved any mailboxes to the cloud, this cloud mailbox will only get email from other cloud mailboxes in your tenant (there are none in this scenario) or internal alerts in Office 365 (and these are reducing over time, as they start to follow correct routing). It can be a major issue though if you use MX to Exchange Online Protection. As there is now a mailbox in the cloud for a user on-premises, inbound internet sourced email for your on-premises user will get delivered to the cloud mailbox and not appear on-premises!

The other problems are that where there is a duplicate mailbox, move requests for those users for onboarding to Exchange Online will fail: 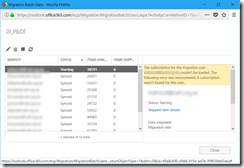 Where the invalid duplicate mailbox exists in the cloud and is getting valid emails delivered to it, the recovery work described below additionally will involve exporting email from this invalid mailbox and then removing the mailbox as part of the fix. Extraction of email from the duplicate mailbox needs to happen before the licence is removed.

To remove the cloud mailbox and to stop it being recreated, you need to ensure that the synced user does not have an Exchange Online licence. You can grant them other licences in Office 365, but not Exchange Online. I have noticed that if you do licencing via Azure AD group based licencing rules then this will also fail (these are still in preview at time of writing) and that you need to ensure that the user is assigned the licence directly in the Office 365 portal and that they do not get the Exchange Online licence. After licence reconciliation in the cloud occurs (a few minutes typically) the duplicate mailbox is removed (though I have seen this take a few hours). The Get-User cmdlet above will show the RecipientType being a MailUser and not Mailbox.

You are now in a position where your duplicate cloud mailbox is gone (which is why if that mailbox had been a target to valid emails before now, you would need to have extracted the data via discovery and search processes first).

Running the above Get-User and Get-Mailbox (and now Get-MailUser) cmdlets in the cloud will show you that the ExchangeGUID on the cloud object now matches the on-premises object and the duplication is gone. You can now migrate that mailbox to the cloud successfully.

We can take a look at what we see in remote PowerShell here:

Recall from above that there were two different ExchangeGUIDs, one in the cloud and one on-premises. These in my example where:

Get-User before licences removed in the cloud, showing a mailbox and that it was previously a mailbox as well:

Get-Mailbox in the cloud showing the GUID was different from on-premises:

Once the licence is removed in Office 365 for Exchange Online and licence reconciliation completes (SKUAssigned is False) you will see that Get-User shows it is not a mailbox anymore:

For users that never had a matching UPN in the cloud and a cloud mailbox, you can licence them before you migrate their mailbox as they will work correctly within the provisioning system in Exchange Online.