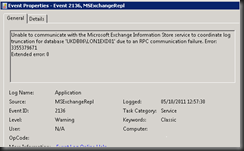 2 replies on “Exchange Log Truncation Failure in a DAG”

I wonder Ex-Admin did not monitor the growth of the log files on DR noes….???

No – they monitored it. It would not clear the logs because RPC access had been blocked to the primary site.