When you install Exchange Server into an existing Exchange organization, your existing configuration typically remains intact and associated with the previous servers and some configuration, that is global in nature, also works across both versions.

The issue was that the transport rules all appeared in Exchange Server 2016 as disabled, but where all enabled in Exchange Server 2013. The Exchange Admin Center could not open the rules and an error was displayed at the bottom which when expanded showed that the RejectEnhancedStatus was invalid, along with lots of the settings of the rule – they all are missing in the right-hand side of the EAC view. 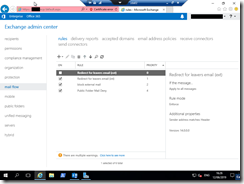 So – how to fix. Well you cannot set the RejectMessageEnhancedStatusCode to a new value in Exchange Server 2016, because this server says you also need to set the RejectMessageReasonText value as that is also an empty string and also shows that a lot of the rule properties are also empty. So you need to fix it in the older version of Exchange.

In Exchange Server 2016 running Get-TransportRule “name of rule” results in:

WARNING: The object transport rule name has been corrupted or isn’t compatible with Microsoft support requirements, and it’s in an inconsistent state. The following validation errors happened:

WARNING: Rule ‘transport rule name’ is corrupt. The specified enhanced status code ‘5.7.x’ is invalid or isn’t compatible with Transport Rule policy requirement. Valid values are 5.7.1, or a value in the range between 5.7.900 and 5.7.999. The code must contain no spaces or other characters.

But running the same on Exchange Server 2013 is successful:

Then run the cmdlet to change the code to a supported value as shown:

Set-TransportRule “name of rule” -RejectMessageEnhancedStatusCode 5.7.1 –RejectMessageReasonText “copy the reason from the output of the above cmdlet”

You need to set the code to 5.7.1 and provide the text again, or Exchange will replace the text with its own text or you need to create a New-SystemMessage for the status codes .900 and above and then use that code in the transport rule. 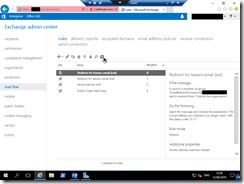